The American Diner was located on Euclid Ave. & 71st Street in Cleveland, Ohio from 1942 until 1956. It was part of a chain of diners owned by American Diners Incorporated of Cleveland, Ohio. This particular Diner was managed by the renown Kenny King who went on to open his popular chain of Kenny Kings Restaurants. It was purchased by Diversified Diners in 1995 (from the last owners in Munster, Pennsylvania) and returned to Cleveland. It has undergone a complete restoration and is now located in Indianapolis, Indiana.

This classic Jerry O'Mahony diner was built in 1937 (serial number 1121) and measures 48 foot long by a mere 10 foot wide. It seats 33 as designed and will ship very affordably due to it's manageable size. 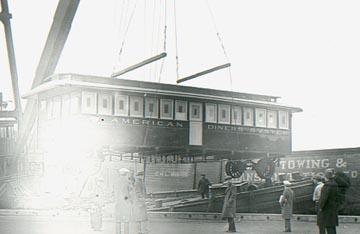 The American Diner was manufactured by the Jerry O'Mahony Co. in approximately 1938. According to building records in Cleveland, Ohio it replaced the outdated #1 "diner car" (as seen at right) of the "All American Diner System" chain which started operations in 1929 . In 1937 the chain changed it's name to "American Diners Inc.". The new diner became the operation's flagship (of six diners in 1937) located at 7103 Euclid Avenue. Building records show the diner was installed on Euclid Ave. in 1941. A John Dessinger was the owner of the chain at that time and his supervisor was Kennith King.

Mr. King operated the "flagship" diner for a number of years (and met his bride-to-be there). Mr. King later purchased one of the restaurants and had renown career in the industry with his own chain of Kenny Kings restaurants. In 1946 American Diners Inc. was sold to Walter Maruschat, manager of the restaurants at that time. The chain then became known as "Walter's American Diner Co." By 1955 Mr. Maruschat had other more demanding projects and he sold the diner to a Mr. Carpenter who was a regular customer at the diner. In 1958 it was listed as Carpenter's Dinet. It didn't last long under Mr. Carpenter's ownership and was sold to a family who moved the diner to Pennsylvania (by train!).